HOYAS GRIND THEIR WAY TO A 3-2 WIN OVER ST. MARY’S RYKEN 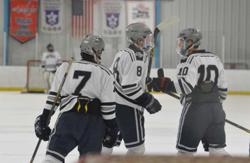 Prep Hockey hit the ice for their first league game to start the 2017-18 season. The Hoyas had a tough matchup against the St. Mary’s Ryken Knights who were also in the playoffs last year. This year’s Prep team is led by Captain Daniel Cole (18) with assistant captains Michael Davidson (18), Will Boggs (18), and Clay Lanham (19). The Hoyas started fast with a power play goal just over four minutes into the first period from Matthew Scola assisted by Daniel Cole. The Knights responded four minutes into the second period to knot it at 1-1. Late in the second period the Hoyas had a scare when Alex Chaconas went down in a heap in the offensive zone. In the third period he was able to return to the game and provided the go-ahead goal with a sensational move on the breakaway bringing the score to 2-1 with an assist from Marco Nascone and Michael Davidson. The Hoyas continued to pepper the opposing goaltender with shots and were able to breakthrough again late in the third when Matthew Scola banked a shot off of a Knight’s defensemen to extend Prep’s lead to 3-1. The knights would not go away quietly and went on to score just over a minute later to cut the lead back to one. The Hoyas held on to open their season with a 3-2 win and pickup two valuable points in the standings. Looking ahead, the Hoyas take on Mt. St. Joes in their first Friday night prime time game at 6:30 at Cabin John. Hoya Saxa!

Posted in Uncategorized | Comments Off on HOYAS GRIND THEIR WAY TO A 3-2 WIN OVER ST. MARY’S RYKEN

Congratulations to members of Georgetown Prep’s Varsity hockey team who earned All-Met honors from The Washington Post for their outstanding play during the 2016-17 season. They include MacDowell Johnston, Second Team, Thomas Olson, Honorable Mention, and Will Boggs, Honorable Mention. Congrats also to the following players who were named All-IAC: Macdowell Johnston, Will Boggs, and James Flannery. A large number of Hoyas also received MAPHL All-Academic First and Second Team honors. Congrats to team members for all of their hard work!

Posted in Uncategorized | Comments Off on Washington Post All-Met and All-IAC Awards: 2016-17 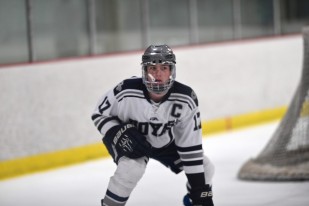 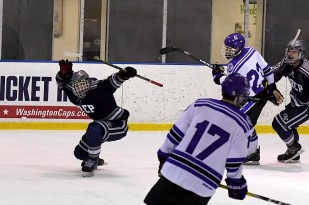 Prep Falls to Gonzaga in MAPHL Semi-final 3-0. Here’s to a great season! 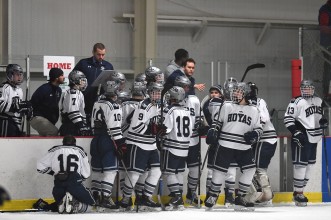 After a seven game run which included the team’s first victory in many years over Gonzaga in early February, and the first I.A.C. championship over Landon in many years, the season came to an end Wednesday night in the semifinal game for the MAPHL cup in which Prep fell short to Gonzaga 3-0. The Hoyas started the season with a new coaching staff, many new players, and a lineup filled with injuries. This was a team that came into the season struggling in their first few games. Many counted this team out early on; however, over the course of the season the coaching, talent and chemistry of this team came shining through. We say goodbye to our seniors, Captain MacDowell Johnston and Assistant Captains Ben Holman and Tom Olson as well as seniors Alex Ratliff and Max Metcalfe. They led this team into battle each and every game and contributed a veteran presence that was the driving force behind the team’s playoff success. We are proud of our team and what they have accomplished this year and thank them for bringing home a cup! Hoya Saxa!

Posted in Uncategorized | Comments Off on Prep Falls to Gonzaga in MAPHL Semi-final 3-0. Here’s to a great season!

Prep prevailed over Landon in a 2-0 shutout tonight.  Congratulations Boys! 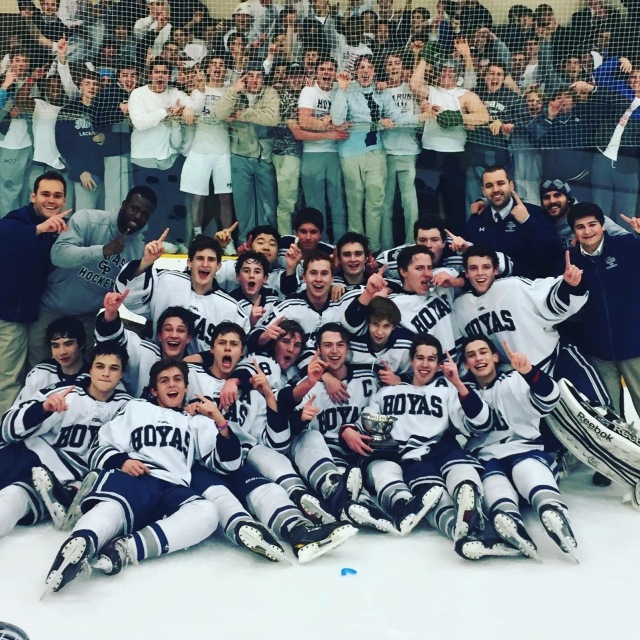 Posted in Uncategorized | Comments Off on IAC TOURNAMENT CHAMPIONS!! 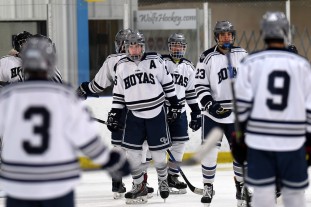 After a long road trip to visit the Saints in Virginia, the Hoyas used some late game heroics on a goal by Daniel Cole assisted by Jack Donavon with 10.9 seconds left to play. Will Boggs had another incredible night in goal, saving all 26 shots in his latest shutout. The boys are looking forward to a championship matchup with rival Landon on Thursday in Rockville. Should be an awesome game! Come out and cheer the Hoyas on to bring home the banner! Hoya Saxa!

Posted in Uncategorized | Comments Off on Prep Advances to IAC Finals: Prep 1 SSSa 0 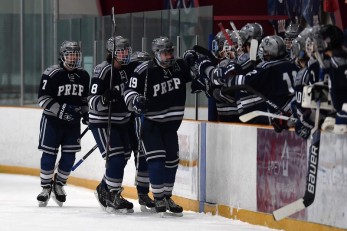 Prep will play St. Stevens/St. Agnes on Tuesday at 4:10 pm at Prince William Ice Rink in the first round of the IAC Playoffs. Prep is the third seed. St. Albans is the top seed and will play the winner of Landon Bullis on Tuesday.

The IAC finals are scheduled for Thursday at 4:45 pm at Ft. DuPont.

MAPHL Playoffs will commence on 2/20. Seeding and game information to come.

Posted in Uncategorized | Comments Off on IAC Playoffs Commence 2/14 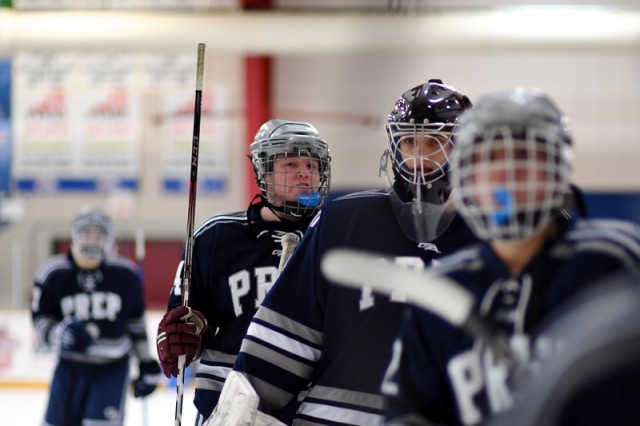 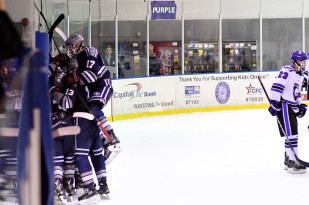 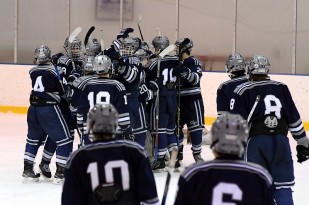 Facing a must win situation the Hoyas were able to beat rival Gonzaga for the first time in many years in what will go down as one of the best Prep hockey wins in recent memory. The Hoya’s defense was strong all night and kept Gonzaga from maintaining long periods of pressure in their offensive zone. Will Boggs posted yet another shutout stopping all 25 shots that came his way. The game remained scoreless until the halfway mark of the second period when MacDowell Johnston scored a power play goal assisted by James Flannery. The Hoyas kept up the pressure while Tom Olson scored a shorthanded goal from James Flannery. Going into the third, up 2-0, the Hoyas continued to keep the puck in their own offensive zone while Gonzaga spent a lot of time in the penalty box. The Hoyas broke through once again late in the third with a goal by James Flannery assisted by Tom Olson and Nolan Urgo. This big win puts the Hoyas one step closer to clinching a playoff spot with a big showdown against St. Johns Friday night at Cabin John. Hoya Saxa!

Posted in Uncategorized | Comments Off on Prep Defeats Gonzaga 3-0 at Ft. Dupont 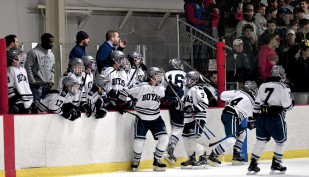 The Hoyas and Saint Albans battled to a 3-3 tie Friday night in front of another standing room only crowd at Cabin John. Once again the stage was set for another heated rival game against one of the IAC and MAPHL’s best teams. The first period was filled with many opportunities, with the Hoyas keeping a lot of the action in their offensive zone for the second half of the period. Despite the frequent chances on both ends the goalies were able to keep the game scoreless heading into the second period. St. Albans broke through late in the second with a short-handed goal, but Prep was quick to respond with a goal by Ben Holman assisted by Michael Curran just a few minutes later to tie the game 1-1. Going into the third, things got heated between the two rivals and the penalty box had a lot of visitors. Tom Olson kicked off the scoring just a minute into the period with an unassisted goal. St. Albans tied the score at 2 before committing a non-releasable 5 minute major for boarding. The Hoya power play started out quick with a goal by Daniel Cole assisted by MacDowell Johnston and James Flannery; however the boys were unable to strike again on the long power play and clung to a 3-2 lead before St. Albans stuck with 53 seconds left to tie it up 3-3. With no overtime in the regular season, the Hoyas were only able to pickup 1 point in the standings. This was a very valuable point against one of the strongest teams in the league and one that is ranked just ahead of Prep in the number 6 spot in the area. Despite the tie, the Hoyas were able to help their playoff push and gain momentum going in their game against DeMatha on Monday.

Posted in Uncategorized | Comments Off on Prep and St. Albans Tie 3-3
Loading Comments...