For information on playing hockey at Prep email SkateAtPrep@gmail.com or click here 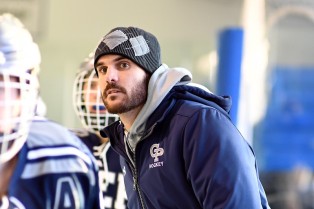 Brian Danver assumed the reins of the Hoyas’ Hockey Team in September 2016. Danver also serves as head coach of the Georgetown Prep Varsity Soccer Team. Danver is a teacher at Matre Dei School, a Catholic boys primary and middle school, where has coached the middle school hockey team to eight straight winning seasons. Danver played hockey in High School for St. Albans, and played in the Washington Little Caps and Ashburn club programs. He was named an All Star for the Maryland State Hockey League in his senior hockey season at St. Albans.

Brian attended Washington College, earning all conference honors in both soccer and tennis. He served as Captain of the soccer team in his senior season. Having competed against Prep while a student at St. Albans and having led the Prep Soccer Team, Brian clearly understands the standards of competition that are so important to a Prep student athlete. 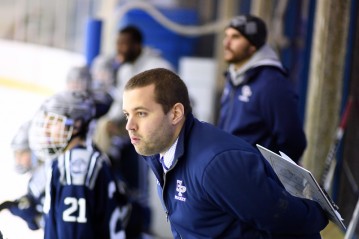 John was born and raised in The State of Hockey, Minnesota. He’s been skating for as long as he’s be able to walk. He played hockey all through high school, and attended an all-male prep high school in Minnesota. He was also a USA hockey referee for eight years, and was an instructor of Robby Glantz’s (skating coach for LA Kings of the NHL) skating camps. Coach John is entering his second season at Prep. John’s commitment to is making Prep players the best they can be on AND off the ice. Coming from an all-male high school similar to Prep, John understands the life at Prep. He is committed to continuing the success of the 2016-17 season and bringing more championships to Georgetown Prep.

Duante’ Abercrombie is a Washington, DC native. He is an alumnus of Gonzaga College High School (Class of 2005), where he helped Gonzaga win 3 MSHL/ MAPHL Championships, multiple Purple Puck Championships, and numerous games over nationally ranked programs, as a player(’01- ’05) and a coach (’08- ’13). His senior year team (’04- ’05) is considered by many to be by far the best high school team to ever play in the D.C. area. Hockey has taken Coach Duante’ around the world. He has trained all over the United States and Canada, and has played parts of 3 professional seasons in Auckland, New Zealand, Pittsburgh, PA, and Brewster, NY. He has trained with some of the top stars in the NHL, and he has personally trained numerous AAA, Prep, Junior, NCAA, and Pro players.  Coach Duante’ is currently considered one of the best up and coming Skating and Skills Coaches in all of hockey, and is looking forward to transforming Georgetown Prep into one of the premier hockey programs in America.