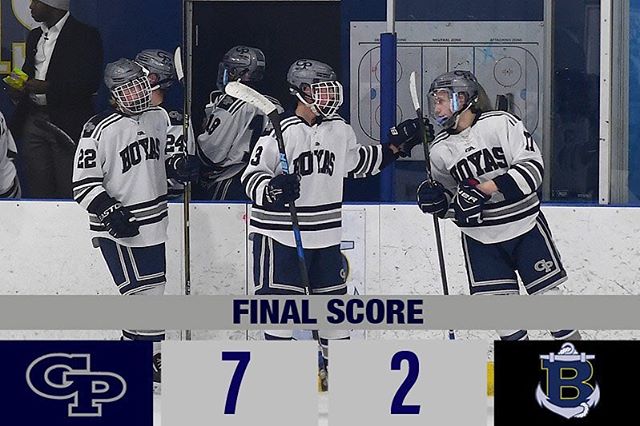 The night started with a ceremony to honor Seniors, Will Boggs, Daniel Cole, Michael Davidson and Nathanial Deleede. The Hoyas hit the ice with a slow start, but midway through the first period James Flannery broke the stalemate with a goal assisted by Michael Davidson and Matthew Scola. Bullis came back quickly to knott it at 1 before the first intermission. The Hoyas dominated the second period opening up the scoring parade with a goal by Alex Chaconas assisted by Pat Fitzgerald. A few minutes later James Flannery (assisted by Marco Nascone) went top shelf to increase the lead to 3-1. Just over a minute later Alex Chaconas would score again on the power play with an assist by James Flannery and Pat Fitzgerald. Alex Chaconas continued his career night two minutes later adding another goal to put the score at 5-1. Later in the second Alex Chaconas got his fourth goal of the evening with an assist by Nathanial Deleede. The Hoyas would tack on one more with a goal by Matthew Scola assisted by Nathanial Deleede before Bullis would score the final goal of the game. This 7-2 win was crucial after a tough stretch for the Hoyas that included losses against Gonzaga and Dematha in the last twogames. This big win brings the Hoyas back to 500 in league play and sets up the final and most critical game of the season so far against O’Connell next Tuesday. Hoya Saxa!

This entry was posted in Uncategorized. Bookmark the permalink.
Loading Comments...