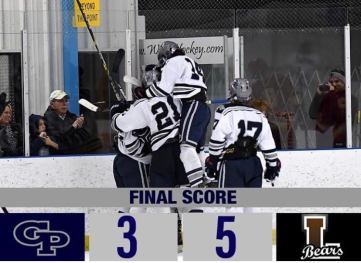 It’s been many years since the Hoyas hosted Landon at the Cabin, and both schools came out in full force Friday night to mark this occasion. Over the years this game has developed into one of the premier rivalries in high school hockey in the DMV. The Cabin was loud and rocking as both teams hit the ice. Although the Hoyas dominated the first period in shots on goal they were unable to put anything on the board and went into the second period down 1-0. Early in the second the Hoyas knotted it up at 1-1 with a goal by James Flannery assisted by Alex Chaconas. The Bears wasted no time in taking the lead again scoring just seconds later to take a 2-1 advantage. Midway through the second Alex Chaconas was able to capitalize on a five minute major penalty for boarding to tie it at 2 on a power play goal. Back and forth play continued as Landon ended up back on top with a 3-2 lead at the end of the second period. Midway through the third the Bears looked to put the game away as they scored to go ahead 4-2. The Hoyas would not go down without a fight as they cut the lead to 1 on apower play goal by Alex Chaconas assisted by James Flannery. The Hoyas pulled the goalie to setup an exciting final seconds of the game but Landon put the game away with an empty net goal to extend their lead to 5-3. The Hoyas look to get back on track this week against West Potomac in a non-league game Wednesday and Gonzaga in a MAPHL game Friday at Cabin John at 6:30.

This entry was posted in Uncategorized. Bookmark the permalink.